The secondary school system in Luxembourg 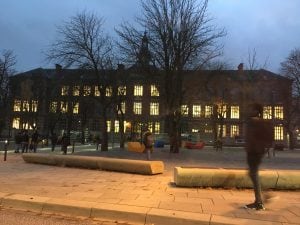 The orientation towards one or the other type of education is decided during the last year (cycle 4.2) of the fundamental primary school between the parents and the teacher responsible for the child. The orientation council composed of professors and of a psychologist with a consultative opinion is not topical anymore since the school year 2016/2017.

In addition to the common classical education taught in German or French depending on the subjects, the classical lycées offer specificities in the lower division (classes from 7ème ESC to 5ème ESC): “German as a foreign language” or ALLET classes for French-speaking pupils with difficulties in German, “Français Plus” for non-French-speaking pupils, and classes with a French vehicular language. These specific schemes are only offered in certain so-called “classical” lycées.

At the Lycée Aline Mayrisch in Luxembourg, progressive integration is offered to newly arrived pupils who have so far attended school abroad.

The Lycée de Garçons de Luxembourg or LGL is one of the most renowned classical secondary schools in Luxembourg. Located in Luxembourg-Limpertsberg.  It is also called by the pupils Lycée de Harry Potter because of its architecture dating from the beginning of the 20th century.

Located near Le Glacis in the same district, the Lycée Robert Schuman is the smallest school in Luxembourg’s higher education system (only 800 pupils). It offers a family atmosphere to the students around a school project that stimulates creativity, student responsibility, a sense of effort and autonomy.

If you would like your child to continue the school program of your country of origin, he/she can join one of the international, European, French or English schools present in Luxembourg.

General (formerly technical) secondary education is offered as an alternative to conventional education for students who do not meet the previous criteria. Several routes are possible:

Here too, special classes will be offered to newly arrived foreign pupils.

According to the chosen orientation, secondary studies in vocational schools lasts also (from the “7e ESG” to the “1ère ESG). They allow the students to acquire skills they had not acquired in the end of fundamental school, so that they can get a final diploma  and either access higher education, or start technical higher education via preparatory courses, or start working.

In high schools that offer this option, students will follow a school curriculum that allows them to access recognized A-Level levels in more than 125 countries around the world. Classes are offered in English. French and German are chosen in 2nd and / or 3rd language. The Lycée Michel Lucius offers this option.

The Fieldgen Private School can also be a complementary option to the offer of public high schools. Located in the railway station area, the school offers classical, general and preparatory education. A boarding school is also available for girls.

There are around thirty high schools, both private and public luxembourgish Lycées. Choicescan be made aside from any geographical criterium linked to the place of residence.

Click here, to choose your high scool according to your needs with Mengschoul.lu.

Consult the interactive platform mengshoul.lu to have a vision on the school map and the specificities of each school system and each high school. You can also consult the website of the Ministry of Education the school offer of high schools and secondary education.