Regulations to drive in Luxembourg

Have you just arrived in Luxembourg with or without your car? Driving rules, tips, features, procedures … Here are several things you absolutely must know if you want to drive a car or a two-wheeler in Luxembourg!

For more information on controls and traffic on Luxembourg roads, visit the Cita.lu website. You will find practical information (construction sites, works, technical problems, detours, news tips, …) and even the possibility to view the roads by webcam to evaluate their traffic!

You have your own vehicle? Consult the compulsory formalities for your personal vehicle.

Failure to comply with the Highway Code may result in the withdrawal of points, a fine or a ticket.

In the event of a fine, the offender is asked to pay it within a maximum of 45 days and up to one month more for non-residents.

However, the facts may be contested. It may be made at the place where the report is drawn up, directly to the official. It is also possible to go to the police station or to send a complaint to the Directorate General of the Grand-Ducal Police (Service national des avertissements taxés SNAT, L-2957 Luxembourg).

In Luxembourg, winter tyres are compulsory for driving on public roads in winter conditions, i.e. snow, ice or frost.

Warning! All four tyres must be changed. It is forbidden to mix different types of tyres. 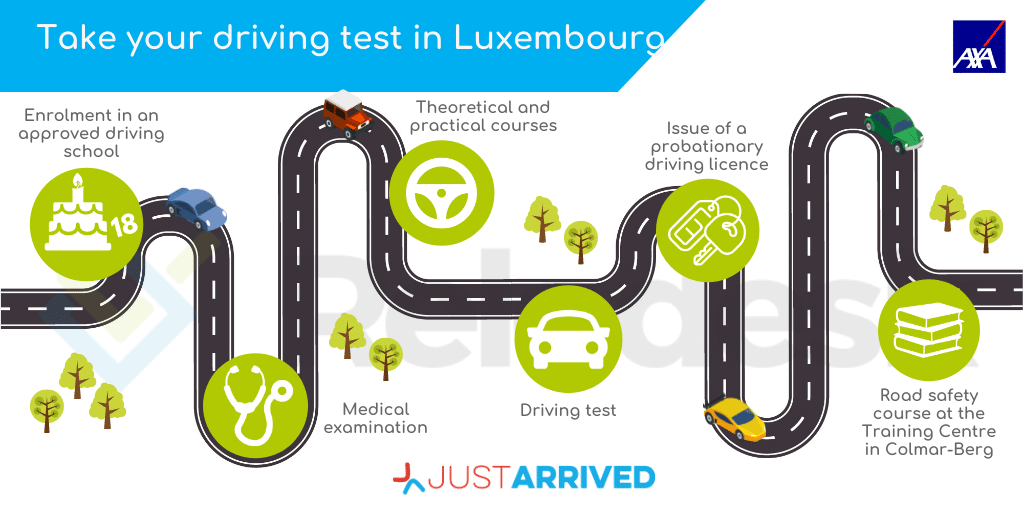 Getting your driver’s license

To take your B driving licence in Luxembourg, you must take at least 12 hours of theoretical lessons (6 hours if you already have a licence of another category), followed by 12 hours of practical lessons given by an approved driving school.

How getting your driving license in Luxembourg ?

In Luxembourg, a driving licence must be obtained through an approved driving school.

In order to obtain the definitive driving licence, the young driver must also attend a road safety course at the Driver Training Centre in Colmar-Berg.

Who can get a luxembourgish driving licence ?

The candidate must be a Luxembourgish resident, be of the required age and undergo a medical examination.

The points-based licence was introduced in Luxembourg in 2002. Its capital is 12 points. Certain offences thus give rise to a reduction in the number of points, such as using a telephone while driving (2 points), a prohibited overtaking (2 points) or a hit-and-run (4 points).

All points shall be surrendered after a period of three consecutive years during which the driver does not commit any infringements causing the loss of points.

It is also possible to follow, on a voluntary basis, an awareness course. Three points can be recovered once every three years.

These courses are given at the Driver Training Centre in Colmar-Berg.

However, the capital may not exceed 12 points, regardless of the number of points recovered. The total loss of those points shall give rise to the suspension of the driving licence.

Applying for an international permit

The fee for an international licence is 12 euros.

In Luxembourg, it is possible to register, exchange or transcribe a foreign licence. The application must then be submitted to the Société nationale de circulation automobile (CNCA).

Exchange and registration of driver’s licences

The exchange of the European driving licence

Registration and exchange of a driver’s licence is optional. Only persons who have obtained a driving licence within a member state of the European Economic Area (EEA) may apply for registration or exchange of a licence.

Such requests are optional, except in the case of an offence resulting in loss of points, suspension or cancellation of a licence.

The purpose of registration is to obtain a duplicate in the event of loss or theft of the permit as soon as possible.

A transcript of a driver’s license

Licences obtained abroad and not coming from an EEA Member State must imperatively be transcribed into a Luxembourg driving licence. The driver has a period of one year from the date of arrival in Luxembourg. After this period, the licence loses its validity in Luxembourg.

Failure to comply with this regulation is charged 74 euros.