December 6th, the day of Saint Nicholas, is an important day for all children in Luxembourg. Basic school students do not have classes. The “Kleeschen” offers gifts to good children. Unfortunately, the terrible “Houseker” accompanies him…

All children in Luxembourg are looking forward to December 6, St. Nicholas Day. 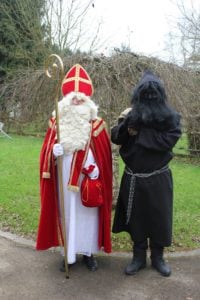 In Luxembourg, the Saint Nicholas Day is a very important day for children.

St. Nicholas Day takes place during the Advent period. This period represents the 4 weeks before Christmas, the day of Christ’s birth. In the Christian religion, Christmas is a very important holiday. It is celebrated on December 25. This period is very festive in Luxembourg. The Christmas markets illuminate and enliven Luxembourg’s cities.

On December 6, we celebrate Saint Nicholas. On this day, “De Kleeschen” brings gifts and sweets to the children.

At the end of November, the children leave their slippers in front of their bedroom door. They are waiting for “De Kleeschen”. He will come during the night of December 5 to 6. Saint Nicolas will leave sweets or gifts for the good children. If they have not been good, his companion the “Houseker” will leave them twigs.

In fact, December 6 is a traditional holiday for children in Luxembourg’s basic schools . They do not have classes on December 6th. On this day, be prepared to keep your young children at home!

Visit of the Kleeschen and the Houseker in the elementary school

An old man with a beard and white hair represents the patron saint of school children. Dressed in red and white, “de Kleeschen” goes around schools and nurseries to meet the children. Delighted, the pupils of the basic school welcome him with great pomp. Saint Nicolas will attend a concert prepared by the different classes. Parents are also invited to attend. The children will sing traditional St. Nicholas songs, including “Leiwe Kleeschen”, the most famous of them.

After the show, Saint Nicholas will distribute sweets. Your child will leave with a bag filled with treats and gingerbread. Usually, the children also receive a Boxemännchen, a little man made of brioche, which is a symbol of this holiday season.

The bogeyman “Houseker” accompanies the Kleeschen. This sinister character is dressed all in black and carries a large bag. In the tradition, the Houseker leaves the disobedient children twigs of wood, instead of candy.

Animations in the cities with the Saint Nicolas processions

All cities of the Greater Region celebrate St. Nicholas with lively processions.

In Luxembourg City, the St. Nicholas procession leaves from the Central Station on the Sunday before December 6th. It then heads towards the Upper Town via the Christmas Markets.

Cities like Esch-sur Alzette or Dudelange in Luxembourg… or Metz in France or Arlon in Belgium also organize their Saint Nicolas procession. The children are delighted to follow the Saint Nicholas car and receive sweets. It is a very joyful time for families.

The legend of Saint Nicholas

The legend of Saint Nicholas was born from a man who really existed.

Saint Nicholas is represented wearing a mitre and carrying a bishop’s crozier. Indeed, the character celebrates the Bishop Nicholas of Myra (270-345). He lived in the city of Myra, in present-day Turkey. He was known for helping the poor and protecting children.

Today, Saint Nicholas is the patron saint of many professions and nations.

Three disobedient children at the heart of the legend

St. Nicholas has nothing to envy to Santa Claus in the Greater Region. The legend of Saint Nicolas tells that 3 children would have been lost while going to glean in the fields.

Frightened, they would have taken refuge in a butcher’s shop. Instead of helping them, he killed the children and cut them into small pieces. Then he locked them in his salting room to sell the meat.

Saint Nicholas, who was passing by with his donkey, knocked on the butcher’s door and asked for something to eat. The butcher understood that he was discovered. He then confessed his fault.

Saint Nicholas then resurrected the children. They were then reunited with their parents.