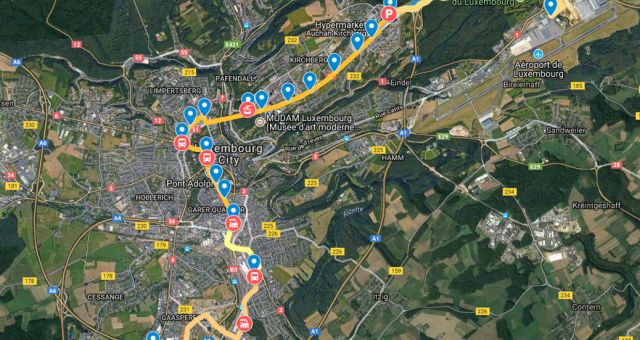 Traffic facilitating measures during the work on the Luxembourg tramway

During the period of the tramway works in the station area (expected end of 2020) and in order to facilitate traffic, a free bus, the “Shuttle Gare”, is provided on the route Stäereplaz/Étoile – Central Station. It serves the usual stops affected by the works: Central Station platform 7, Al Avenue platform 1, Fortuna, Spuerkeess, Paris-Zitha and Al Avenue platform 2. The “Shuttle Gare” runs every day of the week from 5 am to 11 pm, and on weekends from 6 am to 11 pm, to facilitate travel.

During the construction of the tramway, the Neipperg and Fort Wedell car parks offer users free parking hours.

Following on from tramway line T1 put into service in December 2017, from the Circuit de la Foire Internationale (Kirchberg district) to the Pont Rouge, the second stage of the line will serve the Limpertsberg (Theatre and Faïencerie stops) and the Place de l’Etoile since July 2018. Work continues with the aim of linking the Cloche d’Or to Findel.

The tram will then continue to Luxembourg Central Station (Gare district) and then to the Cloche d’Or, south of the city (Gasperich district).

7 new stations will be built on an additional 4.9 km line between the Place de la Gare in Luxembourg City and the Cloche d’Or, a thriving trading district. Among these new stations are the Lycée de Bonnevoie, the Howald area, the french Lycée Vauban and the Ban de Gasperich.

Section of the tram line Circuit of the Fair – Findel

In the other direction, the tram line will be extended from Luxexpo to Findel and Luxembourg airport. 2 new stations are planned on this 3.9 km route from the fair circuit: Heienhaff and Terminal Findel. This extension is part of the Urban Development Plan around the airport.

The works are expected to be completed in 2021 to serve 24 stations and 10 interchanges areas.

In the central part of the line, it is planned that a tramstream will serve each of the stations between Lycée de Bonnevoie and Luxexpo every 3 minutes. The 2 outer sections to Cloche d’Or and Findel, will benefit from a train every 6 minutes. Travel times should be 40 minutes to connect the entire line between Findel Airport and the Cloche d’Or terminus.

What’s next? An extension in anticipation?

There is even talk today of a further extension of the tramway to the Munsbach industrial zone in the municipality of Schuttrange with the creation of a new P+R car park.

Want to know more about transport in Luxembourg? See our dedicated pages.