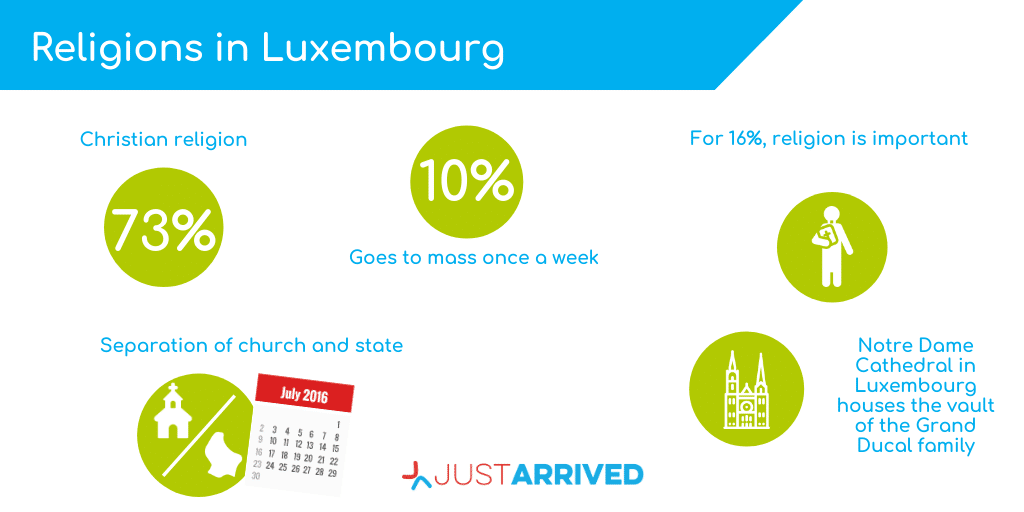 The practice of religion in Luxembourg

The Grand Duchy of Luxembourg recognizes the freedom of worship and expression of religious convictions by article 19 of its Constitution. Agreements have been signed bilaterally between the religious authorities and the State to take charge of the religious representatives or not.

In 1970, at the time of the last census of the religion practiced by the population, 96.9% of Luxembourg residents were Catholic, 1.2% Protestant, 0.2% Jewish and 1.7% other. Today, the law of March 1979 prohibits the registration of confessional, philisophical or religious affiliation in Luxembourg.

Nevertheless, according to the study published in 2011 by CEPS/INSTEAD , the number of Catholics is estimated at 69%, Protestants at 1.8% and other Christians at 1.9%. Muslims represented 2% of those surveyed at the time and practitioners of other non-Christian religions, 2.6%.

It was estimated in 2019, the number of Muslims in Luxembourg of 18 to 20,000 people, representing the 2nd religion practiced in Luxembourg behind the Catholic religion .

Despite the lack of reliable statistics, there has been a sharp decline in religious practice over the past 20 years. Only 13% of the population regularly practices their religious faith and 31% occasionally. 60% of those surveyed still recognize the importance of baptism, communion or marriage and 75% the need for religious accompaniment in death.

The main religious cults in Luxembourg 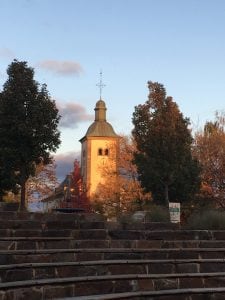 Luxembourg is a country with a Christian tradition. The public holidays and many traditions that still exist are directly linked to Catholic practices. More than 68% of the population of Luxembourg is catholic, and you will find catholic churches in all parts of the country and in your community where you can attend religious services. You will find on the website cathol.lu, the list of parishes on the Luxembourg territory.

The list of celebrations in the different parishes is also published with the language used. Masses are generally celebrated in trilingual Luxembourgish, French and German. Some celebrations are held in French, Italian, English, Latin or other languages. More information on the celebrations here.

The European Parish of Luxembourg brings together native English speakers as well as all other communities where English is a second language. Masses in English are held at the Saint Alphonse Church in Luxembourg.

Protestantism was for a long time the 2nd religion of the country. However, it would seem that with less than 2% of the population, this religion is now supplanted by Islam. There are several protestant places of worship in Luxembourg:

There is also the Protestant Reformed Church and the Evangelical Church in German language.

Of the 7,000 or so British residents in Luxembourg, nearly 60% are Anglicans.

You can also get more information about the Hellenic, Romanian, Serbian or Coptic Orthodox churches on the site religion.lu.

It is also possible to practice other Christian cults in Luxembourg, such as Jehovah’s Witnesses, the Mormon Church, the Apostolic Church, etc.

Islam now seems to be the second religion in the country with about 2% of residents practicing.

Due to the arrival of immigrants from North African countries in the 1970s and from the Balkans in the 1990s, the Muslim community has seen its numbers increase. From a family practice of worship, Muslims now have places of worship and several cultural centers in the country.

Several Islamic associations are present in Luxembourg, in different cities, which makes it easy to practice one’s Muslim religion. A law passed in 2018 bans the wearing of face masking veils in public places.

You can consult the site islam.lu for any further information.

The main synagogue of the country is located in Luxembourg City, Avenue de Monterey. There is also a Jewish community in Esch-sur-Alzette. For more information, you can refer to the website of the Consistoire Israélite de Luxembourg sinagogue.lu.

There is also a Jewish community in Esch-sur-Alzette. You can get more information on the jewish.lu website.

Buddhism began to develop in Luxembourg in the 1990s. It seems that less than 1% of the population is Buddhist. There is a Center for the Study and Practice of Tibetan Buddhism Dzogchen Shedrup Darje Ling in Howald. More information on luxembourg.patrulrinpoche.net/.

More information about religions on the site religion.lu.