Municipal parks to chill out in the City of Luxembourg

The City of Luxembourg has several municipal parks which are all distinguished by their layout. Magnificent green spaces, fabulous playgrounds, they offer incredible spaces to relax and unwind, whether you want to exercise or to relax, with your family, with your children, with friends or on your own.  Try them all and pick your favourite!

The green parks of the Pétrusse Valley offer very nice walks, easy and very pleasant to do both on foot and by bike. It is an ideal place for jogging. In summer we will appreciate the peaceful aspect and the freshness of its trails.

The Pétrusse valley, located under the Adolphe bridge in Luxembourg City, separates the Upper City from the Bourbon plateau. Accessible by stairs or via the Saint Esprit lift, this valley has been landscaped into parks and makes the delight of Luxembourg’s inhabitants. The little Petrusse river originates from Mamer in Luxembourg and is a tributary of the Alzette at the level of the City of Luxembourg in the district of Grund. On the Grund’s side, take advantage of the mini golf, miniature train for the little ones and outdoor fitness area, as well as Skate Park; on the Hollerich’s side, a public basketball court is at your disposal.

The Pétrusse Valley see every year the Broschtkriibslaf against the breat cancer. It also accomodates every year the famous Luxembourg Duck Race, with thousands of ducks swimming down the Petrusse river! For the more athletic ones, you can also discover it by running the DKV Urban Trail.

Easily recognizable with its apple-green color, the Pétrusse Express is the tourist train that takes you on a visit through the old part of the City of Luxembourg. The tour lasts approximately 1 hour and make you visit the historical past of the City of Luxembourg. The small tour is an ideal family outing to discover the lower part of the city without suffering from height differences! The departure every 30 minutes is at the Montée de Clausen near the Casemates du Bock.

Redevelopment of the Pétrusse Valley

A major transformation project of the Pétrusse Valley will allow this extraordinary place in the heart of the capital to regain a wilder and greener aspect. This ecological redevelopment began in February 2020 with archaeological excavations. It is then planned to redevelop the river bed, now concrete, to give it back its freedom. A play area is also planned as part of the redevelopment of the park. The project is planned to be completed in 2 phases, for the start of the horticultural exhibition LUGA 2023 and 2024.

Designed by the landscaper Edouard André in the 1870s, this beautiful public park of Luxembourg-City offers a fabulous green space for relaxation and well-being for all the family. It is located in the heart of the Ville-Haute.

The park was designed as an English garden on the old fortified land of the city, whose dismantling was provided for by the Treaty of London in 1867/ Today, this green setting has shaded corners to cool off in the summer.

A  huge lawn the “Kinnekswiss” invites to rest and relax, and is the perfect spot for sports activities.  It is regularly the scene of events and festivals such as the “Kinnekswiss loves… in summer. 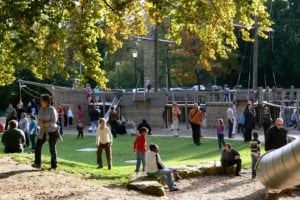 The large wooden pirate ship built in real size is a delight for children. With the giant slide, sandboxes, swings and water games, the Municipal Park is a magical place and dream for children. What a fabulous afternoon to climb, jump, slide or splash. Bring swimsuits in summer!

Small kiosk for refreshments and snacks. Public toilets. The park is accessible all year long, 24 hours a day.

You will also find in this park, the Villa Vauban  which is the Art museum of the City of Luxembourg.

The Parc de Merl is a beautiful park of 5 hectares with a pond, near the districts of Merl and Belair in Luxembourg, making it a favorite meeting place for moms and children and families !

It has a large playground for both young and old children, table tennis, a basketball court, a Tyrolean slide, large lawns for playing football or having picnics, a large toboggan (and small ones), swings,..

You can also go around the pond by bike, rollerskates or with a pushchair, as the tarmac path is smooth. Do not forget to bring bread to feed the ducks!

In the middle of the park, the restaurant “LePavillon” with its terrace overlooking the playground and the pond is very nice, especially since it was completely renovated in 2018.

Every summer, the City organizes the “Jump for fun” activity with a trampoline park to fly away with the family! Opening hours: from July 5 to September 15, from 11:30 am to 7:30 pm. Provide non-slip socks. They are also available for sale on site.

Scheiwisschen Park is known as the “Castle Park” and is located near the Merl and Belair districts.

This children’s playground consists of a large castle that looks like a real fairytale castle with a keep, knights and small farm animals in the village. Completely renovated, it will delight your children who will be able to climb it, cross the monkey bridges,… at the risk of sometimes having to rescue them in narrow passages not intended for adults!

Your children can even enjoy the swings nearby. Picnic areas to enjoy the sunny days with the family. Attention: no free public toilets, no possibility to buy a snack on the spot.

The Central Park located in the district of Kirchberg in Luxembourg-City is the main green area of ​​this sector of the Plateau. The Central Park animates the Plateau of Kirchberg rather urban and business oriented by offering vast spaces of relaxation, walks or sport. With its large pond from rainwater, its playgrounds, its large outdoor amphitheater, this huge park offers greenery to the very urban neighbourhood. It is located between the European School I, the University and the National sport and culture centre D’Coque.

What could be better for residents or  people working in the district than enjoying lunch break and admiring the artistic sculptures of Marta Pan’s “Trois Iles” installed on the pond? An invitation to meditation …
You can also find the artistic work “Dendrite” by the Canadian Michel de Broin in the center of the park’s vegetation maze. You can climb 7 meters high on this gigantic yellow staircase to admire the surroundings.

Central Park is also home to the Kirchberg Arboretum with the other 2 parks Reimerwee and Klosegroendchen.

The route of the ING Marathon passes through this beautiful park.

Take the opportunity to enjoy a drink or a game of petanque with friends at Kyosk, the refreshment bar installed in the park.

Parc Laval in the Eich and Weimerskirch district of Luxembourg is a large park located away from the crowded playgrounds of the city centre.

In an English style, it is located near the Alzette, at the bottom of the Eich Coast. While walking around you can admire magnificent hundred-year-old chestnut trees, as well as some wild orchids in the area deliberately left natural.

The park entrance is located near Place Dargent. Two playgrounds and a multisports ground are at the disposal of young and old children.

The Tony Neuman Garden was built in 1946 by Alphonse Hollman to create an arboretum in the park of the villa, owned by the president of Arbed. This wooded and flowery park has the particularity of counting monumental trees like redwoods and is very well maintained.

There are also large expanses of grass to relax and a playground for children. This park located in the district of Limpertsberg.

This garden is best known for its modern sculptures, some made by some famous local artists.

It should also be known that in the late 19th and early 20th century, Limpertsberg was known for its rose fields which were exported all over the world and in the major European courts. Today the Circuit des Roses proposed by the Tourist Office of the City of Luxembourg allows you to walk along the streets of Limpertsberg to discover its hidden treasures, including Tony Neuman Park.

The place is very quiet because little frequented. The main entrance is in the Avenue de la Faiencerie near the number 162A.

Going out and having fun with children in Luxembourg