Accueil Outings, activities and leisure in Luxembourg Travelling from Luxembourg

Located in the heart of Europe, Luxembourg is an ideal platform to travel to other countries. In addition to Luxair, the Luxembourg airline, more and more airlines are flying to Luxembourg-Findel International Airport.
The TGV stations in Luxembourg-City or in Lorraine (France) also allow you to travel easily by train to any destination in Europe.

According to a study established in 2019 by a German company Blacklane,Findel Airport was named the fastest airport in the world for international flights. Findel passengers spend an average of just over 15 minutes between landing the plane and joining their transportation to leave the airport. The median time worldwide is 23 minutes.

Among the companies serving Luxembourg airport, we find :

You will find all the airlines and destinations served from Luxembourg airport on the LuxAirport. lu website.

Travelling by plane from airports near Luxembourg

You can travel directly and easily from these airports thanks to the airport shuttles from Luxembourg.

Shuttles to and from Luxembourg airport

No more car or parking hassles if you are traveling from one of Luxembourg’s neighboring airports, take advantage of the shuttle buses.

There is a bus service from Luxembourg city and airport to several European airports including Frankfurt-Hahn, Frankfurt and Charleroi: www.flibco.com

Door2Gate is a shared shuttle service from Flibco.com. It is just like a taxi, but much less expensive. You can book the time you want to arrive at the airport for your flight. Its operational service zone is Luxembourg and the greater region. See Door2Gate.

The Emile Weber bus company offers a tailor-made transport service to the airports. Ask the company directly about their airport bus service.

Travelling by train from Luxembourg to France and Europe 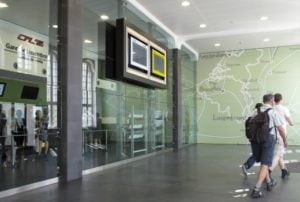 The TGV or normal trains from Luxembourg serve the TGV station of Metz from where you can go to other big French cities by TGV in direct line or via Paris, Lyon, …

For more information and to purchase your tickets for French trains, visit www.voyages-sncf.com.

From the Luxembourg station (bus station), a shuttle bus serves the Lorraine TGV station in less than 1h30. Reservation of seats on the “Gare Lorraine TGV-Express” bus is compulsory and must be made at the CFL stations. See www.cfl.lu.

You can also travel from Luxembourg to other European cities in Belgium, Germany, the Netherlands and many other destinations. Ask for information at the ticket offices or on the CFL website.

To learn more about train transportation in Luxembourg, click here!