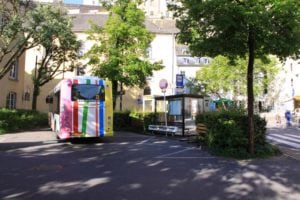 Public transport is very well organised in Luxembourg. They allow easy movement from one point to another.
Luxembourg is a pioneer in this field, since the government has announced free public transport for March 2020. An announcement that has had a worldwide impact! But for the time being, what about bus tickets, where do they go and how much does it cost to travel by bus?

The price of the bus ticket is 2 euros. It will allow you to travel unlimitedly throughout the Luxembourg network, including in the event of a connection and line change, up to 2 hours after composting. You can also buy a day ticket. It will cost you 4 euros and you will be able to travel unlimitedly until 4 a.m. the next morning.

Public transport is free for young people under certain conditions
Some transport lines may be free on Saturdays and Sundays, due to special events such as Mantelsonndeg, stores’ openings on sunday, or other.

In the government’s programme re-elected in 2018, free 2nd class transport will be introduced as of 1 March 2020. Luxembourg will thus be the first country in the world to adopt free public transport. Be careful not to buy subscriptions after 29 February 2020, they will not be refunded after that date!

If you go to a concert or show at the Rockhal, public transport is free with your concert ticket.

Where to buy tickets and bus passes?

Bus tickets can be purchased directly from ATMs located near public transport stops or in stations. If there are no ATMs, as is often the case at bus stops outside the city, you can buy your ticket directly from the bus driver.

You can buy your public transport subscriptions at the AVL subscriptions office of the Hamilius Centre, at the Central Mobility Office (Luxembourg station and Belval-University station), at the CFL ticket offices in the stations and ICTE of Esch sur Alzette station, at the P+R Bouillon, ar at the Info’Box in Luxembourg. You can choose between a monthly or annual subscription.

Otherwise, more connected means also allow you to buy your tickets by SMS to number 64222, via the SMS4Ticket system, by the mTicket and mKAART app.

The mKaart, a public transport pass

The mKaart is a very functional plastic ship card the size of a credit card, on which tickets valid on all the Luxembourg public transports network can be charged up elecronically.

The mKaart is free for all the students up to 30 years old on presentation of a school certificate.

The mKaart card is valid on all the lines run by the 4 Luxembourg public transport networks, namely: AVL, RGTR, TICE and CFL.

Did you know that you could also access mBox secured bike parks or public terminals for electric cars with your mKaart card?

mShop: recharging your tickets on the Internet 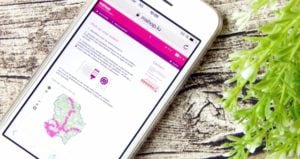 Have you ever forgotten to verify the validity of your subscription, skipped recharging your card before going home after work or missed a train because the counter you were waiting at was already saturated?
Thanks to Mshop.lu, you do not need to go to the station counter to recharge your Mkaart or to buy your tickets. You only need an Internet connection and a user account on the Mshop.lu website.

Then, it is very simple: you recharge your card of transport wherever you want, whenever you want and without moving. Once you bought the product, you just have to validate him(it) from the next day with a border “pick-up”, on a quay(platform), and it’s done!

M-Ticket App, to buy your tickets on your Smartphone 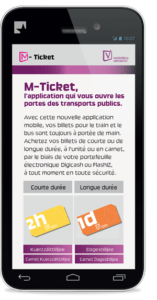 Created by the Community of Transport “Verkéiersverbond”, M-Ticket is a cunning application, to facilitate the use of the public transports of the Luxembourg. In your smartphones!

Download the M-Ticket application and buy your tickets for public transports from your Smartphone.
Pay by Digicash or Flashiz in a totally reassured way and use your Smartphone as ticket to move you. Simple, free and so practical!

For more information on train journeys, it is here.

For more information on transport by bus, follow this link.

SMS4Ticket is a system of payment for the City of Luxembourg public transportation. The purchase of a bus ticket is performed by means of a Luxembourg mobile phone, and the payment is transferred on your phone invoice.

Send a SMS to the following number: 64222 (max. 25cts per text), indicating the letter corresponding to the type of ticket you need (example: A for a short duration ticket). The system confirms you the purchase of the ticket via SMS, which can be used as evidence in case of control. Thus assure that your telephone is fully charged!
Price for the SMS of request: 25cts instead of 12cts. Free confirmation. Price for the ticket: €2. Two free tickets for the purchase of a virtual book of 14 tickets.
What we like: the practicality and the innovation of the various systems, the time gain and the secure payment!

Copyright All Rights Reserved © 2019
By continuing to browse this site, you accept the use of cookies in order to compile audience statistics and provide you with optimal navigation, the ability to share content on social networks and services and offers tailored to your interests.
Accept cookies
To know more about it