Listed as a UNESCO World Heritage site since November 2010, the Echternach dancing procession is a Catholic pilgrimage that takes place on Whit Tuesday. More than ten thousand people attend the pilgrimage, attracted by this unique and fabulous show. The next one will take place 2nd of June 2020.

The day after Whit Monday, which is a bank holiday in Luxembourg, thousands of Catholic pilgrims and spectators come together to Echternach, a city located north of Luxembourg City, to witness this very special procession, as it is done by dancing, or rather hopping for the purists.

Accompanied by musicians playing violin or flute, the pilgrims hop for nearly 3 hours in the religious district in Echternach. Holding each others with white handkerchiefs and dressed in white and black, the pilgrims celebrate St Willibrord (657-739). He was the founder of the Abbey of Echternach and saint patron of the Grand Duchy of Luxembourg. The crypt of the Basilica contains his remains.
In rows of 5 or 6 people, the faithful jump left and right. They hop towards the tomb of Saint Willibrord on a rhythmic tune. This music has become popular. It is now considered part of Unesco’s Representative List of Intangible Cultural Heritage since 2010. Christians who cannot provide the effort required to hop for hours, can follow the procession by singing or praying.

If the true origin of this particular procession is not known, it could possibly cure people suffering from the disease of St. Guy’s dance, a childish nervous disease resulting in clumsy and uncontrolled movements. According to a legend, it was the minstrel from Echternach who asked to play the violin as a last favor before the execution of his death sentence. He would then have succeeded in getting the spectators to dance so much, that they would have asked Saint Willibrord’s help to stop this crazy dance.

From 2019, Whit Tuesday is considered as “Luxembourg Cultural Heritage Protection Day “. As a result, pupils from Echternach schools will be free on the day of the procession to attend it if they wish. They will be able then to join the approximately 2,000 students who participated in the last edition. All Luxembourg schools will also benefit from educational material on Luxembourg’s cultural heritage, including this Echternach Hopping Procession.

To learn more about other pilgrimages: the Octave pilgrimage in Luxembourg and that of Notre-Dame of Fatima in Wiltz.

Do you want to discover other Luxembourgish traditions? Click here. 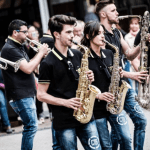 Music Festival in the Grand Duchy of LuxembourgGoing-out Leisure 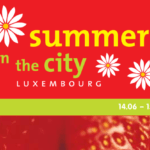 Summer in the City: live and vibrate in Luxembourg during the summer!Going-out Leisure