History of Luxembourg and politics, capital of Europe 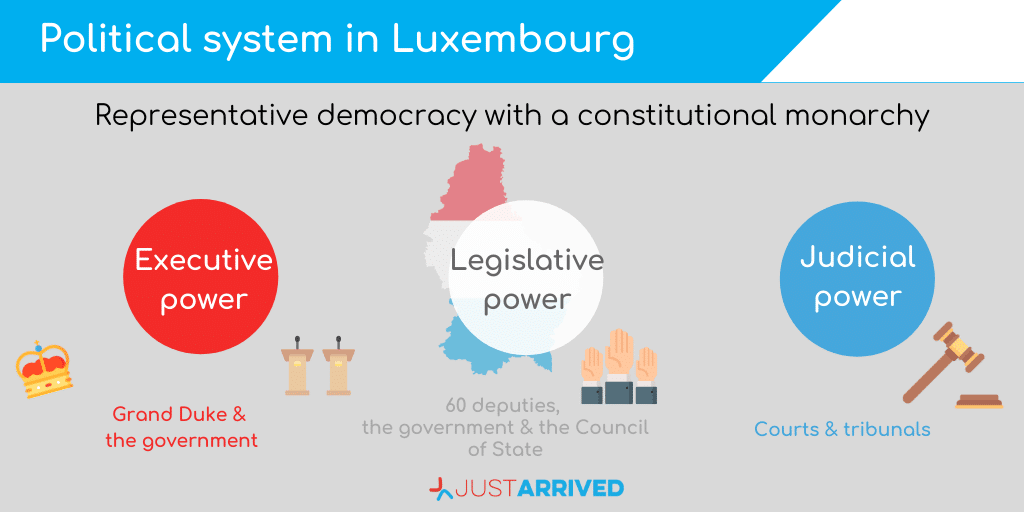 After a rather turbulent history with successions and other conflicts in Europe, Luxembourg acquired its independence in 1839 by the Treaty of London.
Today the country is governed by a constitutional monarchy Constitutional Monarchy, headed by a Grand Duke. It is the only Grand Duchy in the world.

Luxembourg is one of the founding countries of the European Union, thanks in particular to the action of Robert Schuman, a native of Luxembourg through his mother. Today, Luxembourg is home to several European institutions and attracts a very international population. 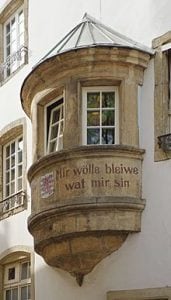 The capital of Luxembourg takes its name from a small castle, Lucilinburhuc, located on the Bock rock. Acquired by Count Sigefroi in 963, the small fort dominating the Alzette Valley gave birth to the Comtee of Luxembourg. See below the legend of Melusine.

Count Henry VII became king in 1308, then crowned emperor of the Holy Roman Empire in 1312. His son John the Blind, the originator of the Schueberfouer, became King of Bohemia.

After Sigismund’s death in 1437 and for lack of a male heir, Luxembourg passed into the hands of the Burgundians in 1443, with the annexation of the Duke of Burgundy, Philippe le Bon. Luxembourg then became a province of the Netherlands and had a destiny linked to this kingdom.

Passed to the hands of the Habsburgs of Spain in 1555, the south of Luxembourg, including the city of Thionville, was ceded to France by the Treaty of the Pyrenees in 1659. Besieged by the troops of Louis XIV in 1684, the city of Luxembourg also passed to France. It was at this time that the Vauban fortifications were built.

In 1697, the County passed back to Spain, whose War of Succession gave Luxembourg to Austria in 1715. The fortress was returned to France after the blockade by the troops of the Revolution in 1795. Luxembourg became the Department of Forests under the reign of Napoleon. In 1798, the Cane War, “Klëppelkrich” against the generalized military service took place. The Napoleonic Code was introduced in 1804.
In 1815, the Congress of Vienna created the Grand Duchy of Luxembourg and granted it to William I, King of the Netherlands. Luxembourg is dismantled. The territories are attributed to Prussia.

With the Treaty of London in 1839, Luxembourg acquired its independence and its current form, a part being given to Belgium (the province of Belgian Luxembourg).

Luxembourg adopted a constitution in 1848.

In 1867, with a new Treaty of London, Luxembourg acquired the status of a perpetually neutral and independent state. The fortress was dismantled and the Prussian garrisons left the territory.

In 1890, Luxembourg obtained its own dynasty with the accession to the throne of Grand Duke Adolphe de Nassau-Weilbourg.

As can be seen, the original fortress was strengthened over the centuries and the attackers. It became the “Gibraltar of the North”, protected by 3 fortified belts and 24 forts. An immense network of 23 km of underground galleries dug in the rock, sheltered the soldiers and the horses. It was especially useful for surviving assaults thanks to the underground kitchens, bakeries and slaughterhouses. Following the independence of Luxembourg in 1839, the fortress was evacuated and dismantled. The fortifications were razed in 1867, to be replaced by new developments such as the Municipal Garden.

Melusine was the wife of the Count of Sigefroi, founder of the City of Luxembourg.

Legend has it that Count Sigefroi was seduced by the voice of a beautiful young girl, Melusine, during a bear hunt in the “Bockfiels”, among the ruins of an old castle. He fell in love with her and asked her to marry him. This one accepted on the condition that she would never leave the place and that he would never spy on her.

They settled there and were happy until the day when Count Sigefroi, curious to see what his wife was doing when she was alone, spied on her through the keyhole. He then saw her lying in her bath, combing her long hair, with a fishtail instead of legs.

Legend has it that she reappears every 7 years, in the form of a snake, waiting for someone to free her from her spell. To do this, you will have to take a key in your mouth and throw it into the Alzette.

While waiting for her deliverance, she sewed a shirt, adding a stitch every 7 years. When the shirt is finished, Melusine will be released from her spell, but all the inhabitants of Luxembourg will disappear with her.

The statue of Melusine can be seen on the banks of the Alzette, at the very spot where she is said to have disappeared into its waters.

From the point of view of Luxembourg is a sovereign and independent state. It is a parliamentary democracy in the form of a constitutional monarchy. The crown is hereditary in the Nassau-Weilbourg family.

The national holiday is June 23, the symbolic day of the Grand Duke’s birthday.

Legislative power is shared between the Chamber of Deputies, the government and the Council of State.

The Chamber of Deputies

The Chamber of Deputies debates and votes on laws. It can also propose laws. The parliamentary commission for the control of budget execution, chaired by a member of the opposition, has a right of review over the management of the state.

There are 60 deputies. They are elected for 5 years by universal suffrage, by proportional representation.

The last legislative elections were held in October 2018.

In the assembly, the political parties represented are :

The government has a right of legislative initiative through bills.

The Council of State

It gives its opinion on the bills and proposals presented to the House before the deputies vote. In particular, it examines the conformity of texts with the Constitution, the various international conventions and general principles of law.

The Head of State, the Grand Duke

The Grand Duke is the Head of State, but his person is inviolable. It cannot be held liable. He cannot be charged or prosecuted. He promulgates the laws in the collection of legislation called Memorial. Laws are countersigned by a Minister, responsible for the relevant ministerial portfolio. Any act bearing the signature of the Grand Duke must first be submitted to the deliberation of the Council of Government.

In 1890, Luxembourg obtained its own dynasty with the accession to the throne of Grand Duke Adolphe de Nassau-Weilburg.

After William IV, his son, it was his granddaughter, Grand Duchess Marie-Adélaïde, who ascended the throne in 1912 at the age of 17. Following reproaches for her attitude during the invasion of German troops during the First World War, she abdicated in 1919. in favor of his sister, the Grand Duchess Charlotte.

During his reign, the country was again invaded by German troops during the Second World War. Not wishing to submit, the Grand Duchess and her government went into exile in London. Luxembourg was liberated in June 1944 by American troops.

Following the legislative elections, every 5 years, the Grand Duke appoints an informant, in charge of proposing a government. In fact, the informant often becomes Prime Minister and Head of Government. He is appointed by the Grand Duke.

The government consists of several ministers, appointed by the Grand Duke on the basis of proposals from the Prime Minister. The government is responsible for drafting legislation. Each minister is entrusted with one or more ministries.

The government resulting from the 2018 elections is a coalition government, between the DP (Demokratische Partei), the LSAP (Lëtzebuerger Sozialistesch Aarbechterpartei) and the environmentalist dei Gréng party.

Despite a majority number of seats obtained in the last elections in 2013 and 2018, the CSV (Chrëschtlech-Sozial Vollekspartei – Christian Social People’s Party), in power for almost 35 years, is once again in opposition. Jean-Claude Juncker, its representative, was Prime Minister for 19 years and left his position following his appointment as President of the European Commission in 2013.

The Prime Minister is Xavier Bettel, from the Democratic Party (DP)

See the electoral system of the Chamber of Deputies and the Commons.

The judiciary is completely independent. The courts and tribunals are charged by the Constitution with the exercise of judicial power.

The members of the Public Prosecutor’s Office are headed by the State Attorney General.

It is composed of 9 members and is based in Luxembourg. It rules on the conformity of laws with the Constitution.

Justice of the Peace

They are the first level of the judicial system. They are located in Luxembourg, Diekirch and Esch-sur-Alzette.

They are competent for civil and commercial matters of lesser importance, provided that the subject matter of the dispute does not exceed 10,000 euros and in the last resort up to 750 euros.

They also have jurisdiction over leases and wage garnishments, regardless of the amounts involved.

They sit in Luxembourg and Diekirch and are competent in civil and commercial matters for all cases not assigned to another court.

They have appellate jurisdiction in cases handled by the Justice of the Peace, where the subject matter of the dispute exceeds 750 euros.

The Superior Court of Justice

Luxembourg, founding country of the European Union and capital of Europe

Luxembourg is one of the 6 founding members of the European Union. It has seen some of its citizens become illustrious figures. Among them was Robert Schuman, born in Luxembourg in 1886 and one of the “founding fathers” of Europe with the creation of the ECSC (European Coal and Steel Community) in 1951.

In 1952, the city of Luxembourg was the first place of work for the Community institutions.

In 1957, the creation of the European Economic Community by Jean Monnet marked a further step towards a supranational European organization. Initially founded by Germany, France, Luxembourg, Belgium, the Netherlands and Italy, it was gradually expanded to include other countries. The European Union now has 27 countries.

The Luxembourg capital, Luxembourg , becamethe European capital in 1986 following the merger of the European institutions, along with Brussels and Strasbourg.

In 2020, a mini-earthquake shakes the European world. Chafea, the Executive Agency for Consumers, Health, Agriculture and Food, is leaving the Gasperich district where it has been operating for over 10 years. 80 people leave the Grand Duchy. Relocated to Brussels and may be dissolved.

For some, this could be a sign thatLuxembourg is gradually losing its status as the capital of the European Union, while the presence of the European institutions was acquired until 2015. It is also known that many European civil servants are now reluctant to come to Luxembourg. Despite an undeniable quality of life, Luxembourg unfortunately has too high rents and traffic problems.